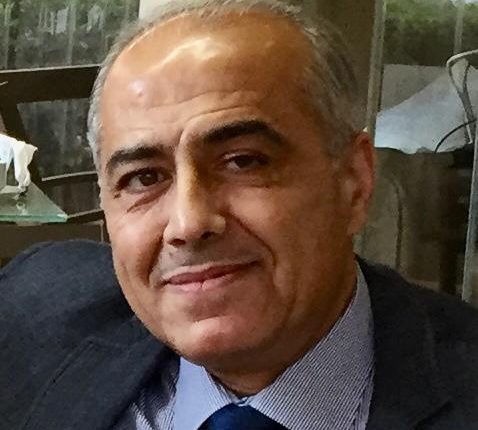 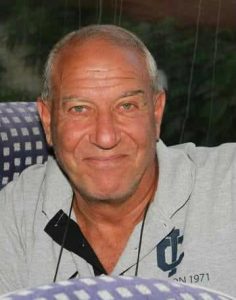 The shot was on behalf of all the shots for the decades of occupation. Used to humiliate is the one who fired the shot hiding in the darkness of his shadow, with his cap worn astray.  The cover of the bullet was a brassy fear and on the track the air shuddered.  The gun was rusty, its pigment bloody, and the nozzle melting hot from gunpowder dust, its hatred blown gray behind a specified target projectile.  Not randomly, directly to the head that did not bend, between the ear and the edge of a helmet that did not repel the spot of death.  The bud of a rose was martyred as it foliated, with rain in the alley where comrades had a spring fragrance, holy and pure.

Henna was a tattoo not an ulcer writing poetry on a body that dwells in the heart of danger.  A lily between toxic branching thorns lined with regular rows carrying killing gear.  On a luxurious corner between a pavement and a wall, Shirine was struck down without feeling the pain, smart pink blood spilled, with eyes continuing to paint in rightness the pride of the cause, angered by the sadistic bestiality of a killer, gathering from the sky the hymns of Bethlehem sought by gloom and a white heart.

She was a complete figure with sweetness addicted to the tenderness of speech, stroked the minds and cursed the darkness and always watched the thieves of the Temple and the altar of the Al-Aqsa Mosque with the testimony of the moonlight, chanting in the streets of Jerusalem and the lemon orchards, practicing sniping sleeping birds in safe houses. She had residency in the hearts, and in the dictionaries the name had an effect and a place; Shirine in its formation gets ahold of three languages, Arabic, Kurdish, and Farisi (Persian), and it means the kind beautiful woman with a glorious look. 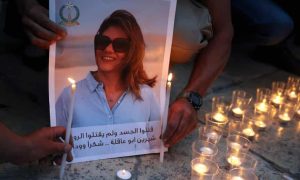 The noon sun was staring at the demon of hell conversing through steel and flames with the people of the camp of Jenin, the pulse of the West Bank and its green symbol.  Live bullets tore the cheers of the demonstrators and the lenses of the press crews.  In cold blood, a deliberate and heinous crime was committed against the pens of freedom and its shining cameras; one of the countless crimes mastered as a habit, by an occupying army with a bloody dogma.

It was a tragic shock and a serious violation of treaties and charters, condemned by Arab and all nations around the world the size of a distraught grief, demanding retribution from the butcher Jewish state, and the latter in denying the human truth reflecting the spirit of the protocols of Zion.  It is based on the falsity of cannons and the fading of teachings formulated by the three Rabbis “Judah, Aqiba and Hensia” in its account and the official statement, a cover-up of evils and dubious lies believed to bury the truth, a rude claim against the background of a derivation from the Talmudic law in its two parts “the Mishnah and the Gemara“ and its two Babylonian and Jerusalem versions.

The body was embraced by St. Joseph French Hospital, and in the midst of grief and the divinity of the funeral, Israeli soldiers stormed its rooms without caring for its human sanctity or the magnitude of the sin.  In the Catholic Melkite Patriarchate, Shirine’s body laid in before the altar, reciting the prayer of love, listening to the singing priests.  One thinks in reverence, for maybe, by forgiveness we punish the sinners?  What dignity is this resurrection from the dead.  Next, the same crime imposed itself on the meeting table between enemy Defense Secretary Benny Gantz and his US counterpart Lloyd Austin on Wednesday, with the aim of justifying the killing of a US citizen and the fierce, savage assault on the funeral procession.

The farewell journey from the door of Hebron to the cemetery was opulent, non-silent, heard by the ugly deaf, where the throats of the people shouted with cheers and prayers.  The casket was majestically wrapped with the Palestinian flag and the echo of bells, in the chorus of magnification with the more splendorous and radiant minarets.  Shirine is gone and in the mind, she remains the star of Jerusalem and the crux of the matter.

A COUNTRY RUN WITHOUT WISDOM OR FORESIGHT..!